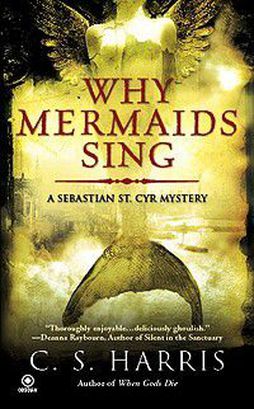 It's September 1811. Death stalks the sons of Regency England's most powerful families. Partially butchered, with strange objects stuffed in their mouths, the bodies are found dumped in public places at dawn. When the grisly remains of the eldest son of Alfred, Lord Stanton, are discovered in Old Palace Yard beside the House of Lords, local magistrate Sir Henry Lovejoy turns to Sebastian St. Cyr, Viscount Devlin, for help. Ranging from the gritty world of London's docks to the luxurious drawing rooms of Mayfair, Sebastian confronts his most puzzling—and disturbing—case yet. With the help of his trusted allies—his young servant Tom, the Irish doctor Paul Gibson, and his lover Kat Boleyn—Sebastian struggles to decipher a cryptic set of clues that links the scion of a banking family and a lord's heir to the son of a humble Kentish vicar. For as one death follows another, Sebastian comes to believe that the murderer has both a method and a purpose to his ritualized killings, and that the key to it all may lie in the enigmatic stanzas of a haunting poem...and in a secret so dangerous that men are willing to sacrifice their own children to keep the truth from becoming known.
Data wydania: 2008
ISBN: 978-0-451-22533-7, 9780451225337
Język: angielski
Wydawnictwo: Obsidian
Cykl: Sebastian St. Cyr Mysteries, tom 3
Stron: 341

Where Serpents Sleep
C. S. Harris
10/10
London, 1812. The brutal slaughter of eight young prostitutes in a house of refuge near Covent Garde...

What Remains of Heaven
C. S. Harris
10/10
When the controversial reform-minded Bishop of London is found bludgeoned to death in an ancient cry...