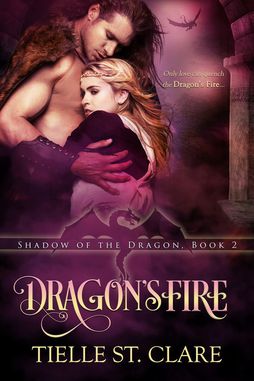 Those words haunt Tiana's nights. A witch with no powers, Tiana is rejected and pitied by her people. She lives a contented, quiet existence on the edge of the Matriarchy's lands-until Princess Merena kidnaps Prince Rainek of Xicanth to use as a sex slave. Seeing his strong, naked body chained to the wall, Tiana discovers desires and needs she never expected-and the passion that flows between them has unexpected results.

Denith, the dragon who shares Rainek's mind, has been preaching patience all his life and Rainek doesn't want to hear it any more. He wants the bedamned beast to pick a mate for him. After thirty celibate summers, he's a frustrated, exhausted virgin.and now he's been captured, stripped and chained inside a dungeon by a conniving princess. His situation hasn't improved. But when a dainty little thing comes into the dungeon to bathe him, Rainek and Denith immediately recognize her as the one.

Now Rainek just has to free himself, kidnap his mate, and convince her that life with a dragon was what she always wanted. Simple.
ISBN: 978-1-4199-0014-3, 9781419900143
Język: angielski
Wydawnictwo: Ellora's Cave
Cykl: Shadow of The Dragon [Clare], tom 2
Kategorie: Fantastyka, Fantasy, Romans paranormalny/fantastyczny
Stron: 212
dodana przez: doomsday071

Dragon's Kiss
Tielle St. Clare
8/10
Lorran has studied dragons for years, hoping to find a way for the wild creatures and humans to live...

Dragon's Rise
Tielle St. Clare
7/10
As a child, Prince Bren of Xicanth saw the devastation created when a dragon is rejected by its ma...

Dragon's Prey
Tielle St. Clare
7/10
Captured and put into slavery, it should be a simple thing for Kayla to escape, if only her dragon...