Kiss of a Demon King 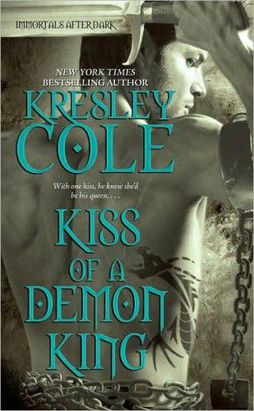 With one kiss, he knew she'd be his queen... From New York Times bestselling author Kresley Cole comes this spellbinding story of a demon king fighting to reclaim his crown and the wicked sorceress who dares to use his most secret desires to thwart him. His obsession: the enchantress who surrenders her body, but not her heart. After Sabine, the Queen of Illusions, lures and traps Rydstrom Woede in her lair, the ruthless warrior fights to resist her seduction. But his fierce demon nature lusts for her delicate body and won't be denied. Even as Rydstrom plots to escape, he still intends to claim Sabine as his own--on his terms. Her downfall: the battle-scarred demon who vows to keep her at all costs. When Rydstrom breaks free, he abducts Sabine, turning the tables. Now she's the one struggling to resist his delicious torment. With each relentless encounter, Sabine hungers more for her merciless adversary. They were never supposed to want each other this much… If they can defeat the sinister enemy that stands between them, will Sabine make the ultimate sacrifice to save her demon? Or will the proud king lay down his crown and arms to keep his sorceress?
Data wydania: 2009-02-01
ISBN: 978-1-4165-8094-2, 9781416580942
Język: angielski
Wydawnictwo: Pocket Books
Cykl: Immortals After Dark, tom 7
Kategoria: Literatura obyczajowa
Stron: 417
dodana przez: bookkeeper

A Hunger Like No Other
Kresley Cole
6.1/10
A mythic warrior who'll stop at nothing to possess her… After enduring years of torture from the va...

Dark Needs at Night's Edge
Kresley Cole
8/10
A vampire warrior consumed by madness, trapped in the lair of an otherworldly temptress only he can ...

Dark Desires After Dusk
Kresley Cole
7.7/10
A ruthless demon mercenary. A lovely young halfling. In the dark, there's no escaping desire. A sed...